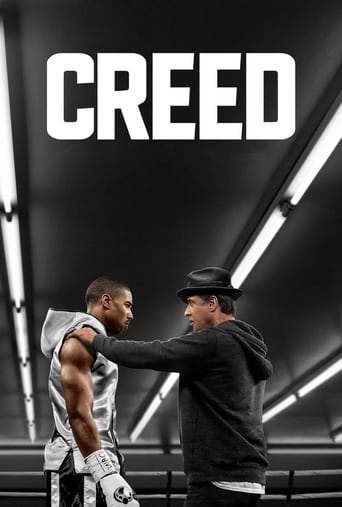 Andy Whitfield over 2 years ago
Cooler gets charismatic performances from Jordan and Stallone. Great!

pessimist almost 4 years ago
A beautifully shot thrilling, human story where the heaviest hits are the emotional ones.

Charlie Alcock 4 years ago
Really wins you over. Has gravitas without feeling heavy. Great stuff.

Michael Cole 4 years ago
A second chance at making Rocky V, but this time it's good.

Brandon Keck 4 years ago
A fresh take on the franchise for 90% of it. But the momentum fizzled out at the end.

Daniel Jones 4 years ago
Nostalgic. Tearjerking. A true return to form for the beloved franchise.

Ryan Boucher 4 years ago
Visceral boxing. Rocky's plot was the only one worth exploring and it wasn't.

Tony Gandía over 4 years ago
An unexpected achievement: rousing and riveting with a stellar Stallone.

emilio murillo over 4 years ago
Amazing all the way through. Fantastic twist from the original series. Exciting, touching.

Dónal Kennedy over 4 years ago
Sly steals the show here with his best performance since Rocky I. Powerful stuff.

Fabio Vanegas over 4 years ago
Rocky Balboa back. Good movie.

JustinMFnTime over 4 years ago
Pretty Good, Captures the Feel of the first Rocky with a different story.

Dominic Dirupo over 4 years ago
Loved it. Best Rocky since III

Kayley Sage over 1 year ago

Daniel Lanciana over 1 year ago
The former World Heavyweight Champion Rocky Balboa serves as a trainer and mentor to Adonis Johnson, the son of his late friend and former rival Apollo Creed.
Read more on