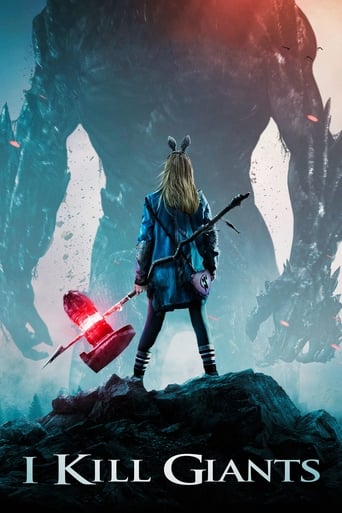 Eric Brainard 7 months ago
Much different than I was expecting. It's a good drama with a nice fantasy cover.

Natalie over 1 year ago
liked this until we found out why she is how she is, none of characters have depth

Michael Cole over 1 year ago
Like the premise, but it's still boring to watch

Kayley Sage almost 2 years ago
Fun fantasy, that doesn't give you all the asnwers right away. Loved the ending.

Ralph Hert over 1 year ago

Billy Padgett over 1 year ago

dark over 1 year ago

Brentt Nerves over 1 year ago

somone someone over 1 year ago

Nathaniel Spencer over 1 year ago

Manu over 1 year ago

Dan Lovelace almost 2 years ago
Sophia, a new high school student, tries to make friends with Barbara, who tells her that “she kills giants,” protecting this way her hometown and its inhabitants, who do not understand her strange behavior.
×
Facebook Twitter