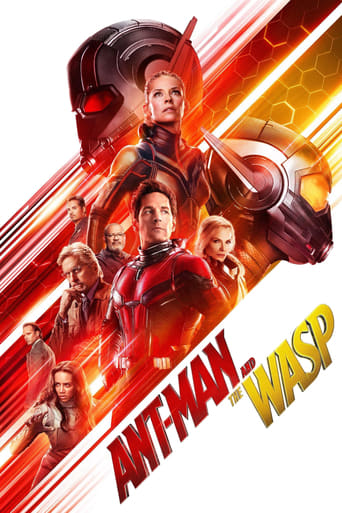 Amanda Mathews 1 year ago
Just as good as the first, if not better. Brilliant addition to the Marvel world

Kayley Sage 1 year ago
Did not disappoint, a great movie, and a great sequel.

Eric Brainard 1 year ago
As good as the 1st one. The ending really made me think of the hope for the heroes in MCU.

nicole over 1 year ago
Just the right amount of cheese

Kosala Liyanage over 1 year ago
Fun and action packed

Brandy E over 1 year ago
Very likeable, I enjoy this character.

Aaron Jones over 1 year ago
Pretty much felt the same way I did about the first Ant-Man.

Daniel Jones over 1 year ago
Hilarious. Probably my favorite Marvel series at this point.

Charlie Alcock almost 2 years ago
Not the best Marvel movie, but by no means the worst. Very likeable.

Berke Elmas 1 year ago
Just when his time under house arrest is about to end, Scott Lang puts again his freedom at risk to help Hope van Dyne and Dr. Hank Pym dive into the quantum realm and try to accomplish, against time and any chance of success, a very dangerous rescue mission.
×
Facebook Twitter