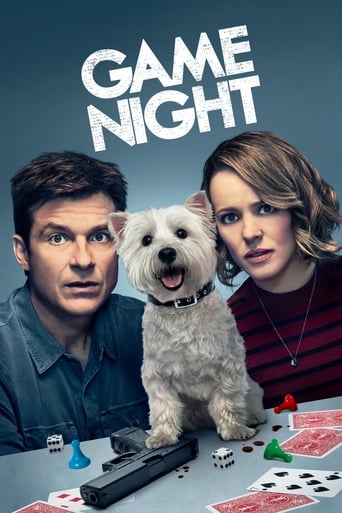 N B 1 year ago
Pretty funny😃

Natalie over 1 year ago
i actually found this funny and really enjoyed it!

Melanie DSouza over 1 year ago
This had me laughing out loud at times. Really light and enjoyable.

Fernando Olivas over 1 year ago
Enjoyable.

Aaron Jones almost 2 years ago
Well crafted and hilarious. Jesse Plemons steals the show, but everyone's great in it.

LANX 12 months ago
Max and Annie's weekly game night gets kicked up a notch when Max's brother Brooks arranges a murder mystery party -- complete with fake thugs and federal agents. So when Brooks gets kidnapped, it's all supposed to be part of the game. As the competitors set out to solve the case, they start to learn that neither the game nor Brooks are what they seem to be. The friends soon find themselves in over their heads as each twist leads to another unexpected turn over the course of one chaotic night.
×
Facebook Twitter