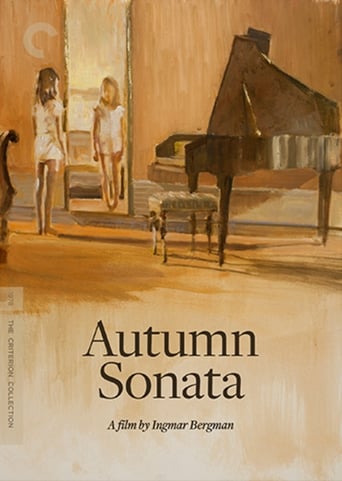 Camila Peixoto 1 year ago
A caricature of a neurotic daughter and her narcissistic mother.

Ari von Nordenskjöld over 4 years ago

Daniela over 5 years ago

Austin over 6 years ago
Autumn Sonata (Swedish: Höstsonaten) is a 1978 Swedish drama film written and directed by Ingmar Bergman. The film stars Ingrid Bergman, Liv Ullmann and Lena Nyman. It tells the story of a celebrated classical pianist who is confronted by her neglected daughter. It was Ingrid Bergman's last performance in a major theatrical feature film, and the film won a Golden Globe for Best Foreign Language Film at the 1979 Golden Globe Awards. The plot focuses on a prominent concert pianist, Charlotte Andergast (Ingrid Bergman), who has been neglectful and dismissive of her children, whom she has not seen in over seven years. Charlotte decides to make a visit to her eldest daughter, Eva (Liv Ullmann) at her remote house, where she lives with her husband, Viktor (Halvar Björk). Upon arrival, Charlotte discovers that her other daughter, Helena (Lena Nyman), who is mentally and physically disabled (and was placed in an institution by Charlotte) is living with and being taken care of by Eva. Wounded...
Read more on