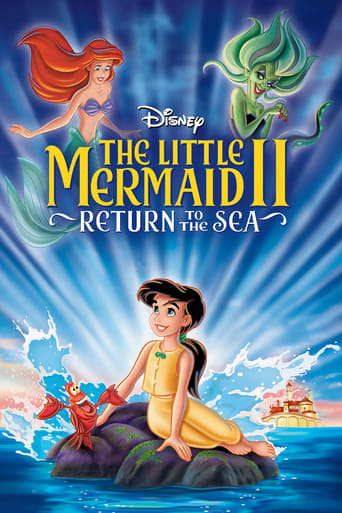 40
126
9
Rate this film
Add a review
Delete Rating/Review Share Add to queue
In your queue
Remove it
The Little Mermaid II: Return to the Sea 2000

Kayley Sage almost 2 years ago
The villain is lame, but I love this movie, fight me.

Amanda Mathews over 2 years ago
It was ok, but didn't really hold up compared to the first.

Rachel Marshall 3 years ago
Not a fan of Melody and don't like how Ariel's character has changed.,

Nicolaus Miller over 5 years ago
Just about the same as the first just with Ariel's daughter.

georgie almost 7 years ago
no way near as good as the first one. still fun though.

Daniel Jones over 7 years ago
Why would you even consider it?

Rob Corradi over 7 years ago
Don't. Even if they beg.

Lino Monteiro over 7 years ago
A shameless rip-off of the original movie without any memorable characters.

Dylan Clites over 7 years ago
Stay away from this one if at all possible. Just a complete rehash of the first movie.

Aleksa Ferreira over 2 years ago

Jonathan Casey Spencer over 2 years ago
The Little Mermaid II: Return to the Sea is a 2000 Disney animated feature film and direct-to-video sequel to the 1989 animated film The Little Mermaid. Directed by Jim Kammerud and Brian Smith, the story takes place over a decade after the original film, and focuses on Ariel and Eric's daughter Melody, a human princess who longs to swim in the ocean despite her parents' law that the sea is forbidden to her. This sequel stars the voices of Jodi Benson as Ariel, Tara Charendoff as Melody and Pat Carroll as Morgana, the film's new villain. It is the last film in the chronology of Walt Disney's version of The Little Mermaid. Set some unspecified time after the events of the original film, the film begins with a celebration for Ariel and Eric's newborn daughter Melody on a ship at sea. Ariel's father King Triton presents baby Melody with a magic locket. The party is interrupted by Morgana, sister of the deceased Ursula, who threatens to cause Melody harm, using her as leverage to get...
Read more on