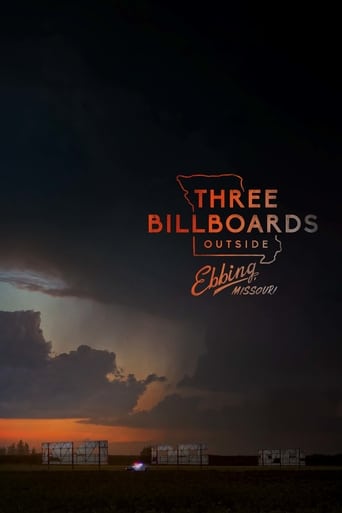 45
124
26
Rate this film
Add a review
Delete Rating/Review Share Add to queue
In your queue
Remove it
Three Billboards Outside Ebbing, Missouri 2017

Felícia Silva 3 years ago
not a bad word about it

N B 4 months ago
Powerful movie

Kosala Liyanage 2 years ago
Deserves every Oscar they can give it.

Jared Dantis almost 3 years ago
Frances McDormand really knows how to drip raw and honest emotion on an audience.

Danny B 3 years ago
Gripping all the way though. McDormand is so compelling in her toughness and anger.

Neil Cooke 3 years ago
A great movie with terrific performances about what anger gets ya. Deep empathy on show.

Emma H 3 years ago
A fantastic exploration of grief. Stunning script and performances.

Daniel Jones 3 years ago
Interesting story with great cast and plenty of twists and turns. Best of 2017? Maybe.

Dzenan Suljevic 3 years ago
Story about broken people that will make you laugh and cry. Great performances all-around!

Aaron Jones 3 years ago
Baffling at times, but it keeps you interested. Not a "Best Picture," but good enough.

Viviana Giorgi 3 years ago
well filmed,dialogues are great.story is a bit too surreal,character development too quick

Tony Gandía 3 years ago
Moments of dark comedy work better than dramatic ones; but it's deft and original.

Kayley Sage 3 years ago
A deep film, a brilliant example of the results of anger and the expression of grief.
After seven months have passed without a culprit in her daughter's murder case, Mildred Hayes makes a bold move, painting three signs leading into her town with a controversial message directed at Bill Willoughby, the town's revered chief of police. When his second-in-command Officer Jason Dixon, an immature mother's boy with a penchant for violence, gets involved, the battle between Mildred and Ebbing's law enforcement is only exacerbated.
×
Facebook Twitter