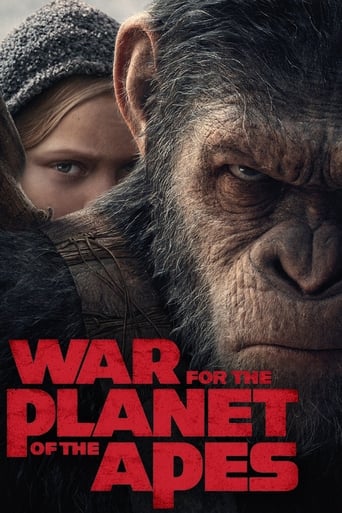 Paul Flanaghan over 3 years ago
God damn dirty humans! An tense conclusion to the trilogy.

Michael Cole 3 years ago
Best of the trilogy, but ends a bit anticlimactically

Bruno Ferreira Machado 3 years ago
An excellent ending to a fantastic trilogy. Heartbreaking and thrilling.

Kayley Sage over 3 years ago
A film about apes that depicts better the horrors of war than half war films out there.

Fabio Vanegas over 3 years ago
An excellent movie

Natalie over 3 years ago
THIS MADE ME SO SAD

Noah Rymer over 3 years ago
not a great stand alone film, but a fantastic end to the trilogy.

Facu Leiva-Freytes 3 years ago
Caesar and his apes are forced into a deadly conflict with an army of humans led by a ruthless Colonel. After the apes suffer unimaginable losses, Caesar wrestles with his darker instincts and begins his own mythic quest to avenge his kind. As the journey finally brings them face to face, Caesar and the Colonel are pitted against each other in an epic battle that will determine the fate of both their species and the future of the planet.
Read more on