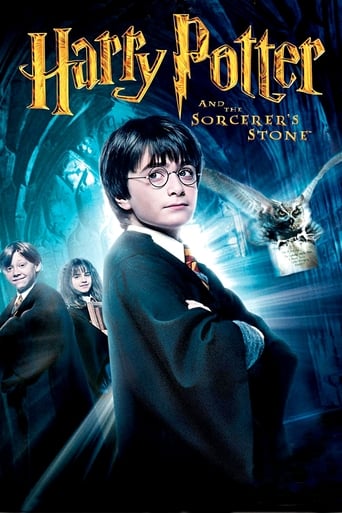 Emma Fitzgerald over 5 years ago
The one that started it all. Go, go, Gryffindor.

Penny almost 3 years ago
It was one of the first movies I saw, and I'll always have a soft spot for it.

Amanda Mathews over 3 years ago
Did a wonderful start to the series in movie format.

Claudia González almost 4 years ago
I admit that I grew up along this saga, so heart is the one talking.

Katy Eller over 4 years ago
Perfect adaptation of the 1st book.

antoshka over 5 years ago
I like it! It's like a fairytale and it reminds me of my childhood as well!

Ashley Beacom almost 6 years ago
such innocence, the perfect actors for the roles

Lachie Munro 6 years ago
Fun for kids but the book is more involving to the audience.

Lino Monteiro over 6 years ago
Taking us to the wondrous universe of Hogwarts, a magical tale that has charmed us all.

Mobina almost 7 years ago
It is really wonderful & everybody sholud watch it at least 4 one time.

Robyn Hamilton 7 years ago
Great in all senses. The magical world of Hogwart's is dreamed up perfectly.

Charlie Gleason 7 years ago
Not a terrible film, but Chris Columbus could have done so much more with it.

Jonathan Evans over 7 years ago
Naww why not, it was movie making material. It made childhood more fun.

georgie over 7 years ago
you can't beat the first ever potter movie - a true classic.

Matthew Tubbs over 7 years ago
Love it....

Alexandra Nt Lampost over 7 years ago
The beginning of an amazing story.
Harry Potter and the Philosopher's Stone, released in the United States and India as Harry Potter and the Sorcerer's Stone, is a 2001 fantasy film directed by Chris Columbus and based on the novel of the same name by J. K. Rowling. The film is the first instalment in the Harry Potter film series, written by Steve Kloves and produced by David Heyman. The story follows Harry Potter's first year at Hogwarts as he discovers that he is a famous wizard and begins his magical education. The film stars Daniel Radcliffe as Harry Potter, with Rupert Grint and Emma Watson as Harry's best friends Ron Weasley and Hermione Granger. Warner Bros. bought the film rights to the book in 1999 for a reported £1 million. Production began in 2000, with Columbus being chosen to create the film from a short list of directors that included Steven Spielberg and Rob Reiner. J. K. Rowling insisted that the entire cast be British or Irish, in keeping with the cultural integrity of the book and the film. She also...
Read more on