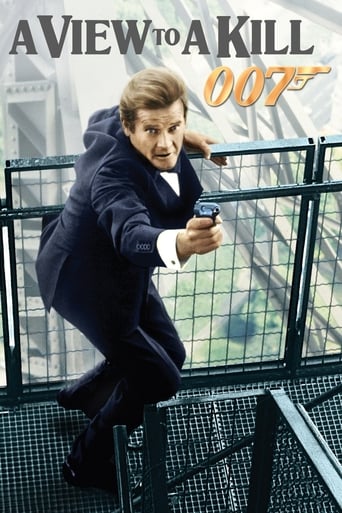 Cory Oldridge over 4 years ago

Michael Cole 3 years ago
Let's be honest, Moore is WAY too old to be playing Bond at this point.

Dylan Clites over 7 years ago
Christopher Walken is the only thing that makes this movie even remotely memorable.

Scott Hume over 3 years ago

Angela Ka over 4 years ago

Tom o'brien 5 years ago
A View to a Kill (1985) is the fourteenth spy film of the James Bond series, and the seventh and last to star Roger Moore as the fictional MI6 agent James Bond. Although the title is adapted from Ian Fleming's short story "From a View to a Kill", the film is the fourth Bond film after The Spy Who Loved Me, Moonraker and Octopussy to have an entirely original screenplay. In A View to a Kill, Bond is pitted against Max Zorin, who plans to destroy California's Silicon Valley. The film was produced by Albert R. Broccoli and Michael G. Wilson, who also wrote the screenplay with Richard Maibaum. It was the third James Bond film to be directed by John Glen, and the last to feature Lois Maxwell as Miss Moneypenny. Despite being a commercial success, with the Duran Duran theme song performing well in the charts and earning a Golden Globe nomination for Best Song, A View to a Kill got a mixed reception by critics and was disliked by Roger Moore himself due to his age. Christopher Walken,...
Read more on