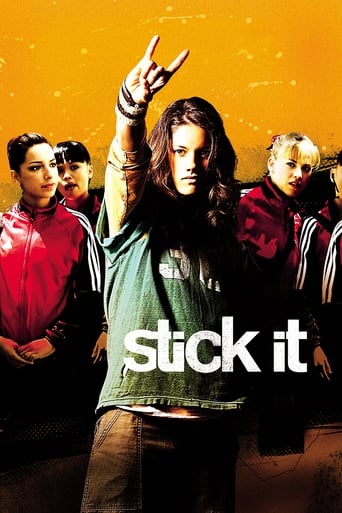 Freya over 4 years ago
Love that movie! She's a great rebel.

Peter Renshaw 7 years ago
'Dalmatians are born with spots they don't earn them which is exactly my point.'

Daniel Jones 7 years ago
Watched this with the girlfriend. Not bad for a teen sports movie. Bridges "sticks it"

Elle Smith over 2 years ago

Marlene over 4 years ago

Nikki Elvery over 5 years ago

X. Blake Sparrow over 5 years ago

shelby strube over 5 years ago
Stick It is an American teen comedy-drama film starring Jeff Bridges, Missy Peregrym, and Vanessa Lengies. It was written and directed by Jessica Bendinger, writer of Bring It On; the film marks her directorial debut. It was produced by Touchstone Pictures and was released in theatres on April 28, 2006. Haley Graham (Missy Peregrym) is a rebellious 17-year-old who is forced to return to the regimented world of gymnastics after a run-in with the law. A judge sentences Haley to her ultimate nightmare, attending an elite gymnastics academy run by legendary coach Burt Vickerman (Jeff Bridges). Haley was once considered one of the most talented gymnasts in the US. She made it to the World Championships, but she walked out of competition in the middle of the finals, costing the American team the gold medal and leaving many people hurt and crushed, making her one of the most hated people in gymnastics. She walked away because her mother and her gymnastics coach were having an affair. Haley...
Read more on