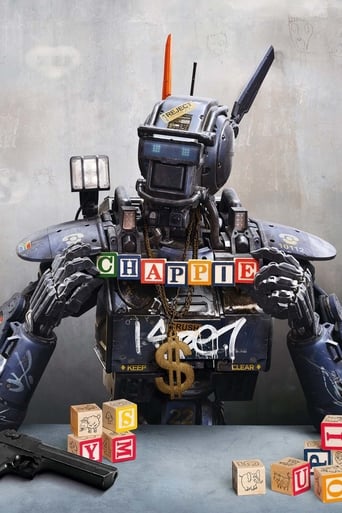 Michael Cole 3 years ago
Could have done without the annoying punk couple.

Ryan Boucher over 4 years ago
It's better written than I expected.

Zach Sly 5 years ago
Chappie the character is amazing, Chappie the movie is a bit of a mess. Fun regardless.

Jared Bennett over 5 years ago
A little too much like "District 9" but still enjoyable.

Paul Mathers over 5 years ago
I really enjoyed this film, a cross between A.I., Mad Max and Robocop.

Andrew K Kirk almost 6 years ago
Strong, but not at same level as Blomkamp's previous work.

Nat Voisey almost 6 years ago
Compared to his last work (District 9), this was defiantly a flop...

Danial Pearce almost 6 years ago
The accents are annoying, acting isn't great. But I still liked it. Good story.

Bruno Ferreira Machado almost 6 years ago
Ugh. I tried to like it. It's just cringeworthy. Awful acting. Script makes no sense.

Vera Choo 6 years ago
It is pretty relatable to today's world where robots are highly utilised.
Every child comes into the world full of promise, and none more so than Chappie: he is gifted, special, a prodigy. Like any child, Chappie will come under the influence of his surroundings—some good, some bad—and he will rely on his heart and soul to find his way in the world and become his own man. But there's one thing that makes Chappie different from any one else: he is a robot.
Read more on