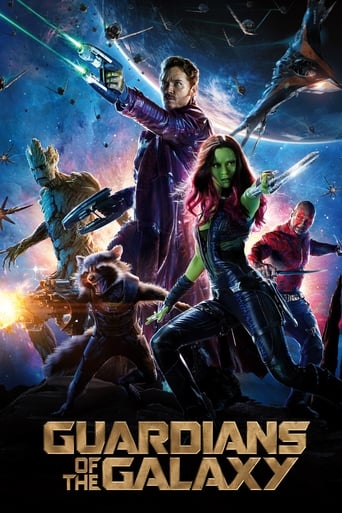 Kyle Birrer over 5 years ago
It reminds me so much of firefly, also has a killer soundtrack

Kate Birch over 1 year ago
Good film, huge fun, and isn't what you would expect from Marvel.

Sydney Stene almost 2 years ago
Tons of fun, loved it. Did feel like they crammed too much prep for next movie at the end.

Dzenan Suljevic over 2 years ago
Fun ride that sets the scene for couple of (hopefully) awesome sequels. Bring on 2017!

Charlie Alcock almost 3 years ago
I really like this film a lot.

Lucas A Turney almost 3 years ago
It's Marvel, so you know it's quality. If you loved the comics then you'll love the movie.

John Swallow over 3 years ago
Didn't enjoy this as much as I hoped I would. Not much of a story.

Carlos Humphrey almost 4 years ago
Light and touching, with some very pretty moments.

Angela over 4 years ago
Nice movie.
Light years from Earth, 26 years after being abducted, Peter Quill finds himself the prime target of a manhunt after discovering an orb wanted by Ronan the Accuser.
Read more on