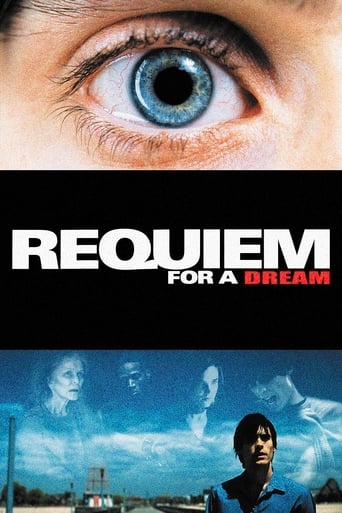 Alexis Kennedy over 6 years ago

Kayley Sage over 2 years ago
This is raw, and brutal, and genuinely impressive, wow.

Michael Cole over 3 years ago
There's only two therapies for addiction: ECT or more drugs.

Denton McCabe over 3 years ago
This movie is pathetic. I have zero respect for anybody who considers this film "good."

Leif Jacobson over 4 years ago
A bit overrated, but nevertheless a great film, albeit one that will make you miserable.

Guy Meltzer over 4 years ago
movie that made me man-cry many times. such a sad narrative. but top-notch actings.

ashley lee over 5 years ago
I consider this one of the totally-fucked-up-movies-you-can't-look-away-from.

Tony Gandía over 5 years ago
Aronofsky creates the best anti-drug movie ever. Leto, Connelly and Burstyn are great.

Arun.S.Paul over 5 years ago
Beautiful, tragic and some of the best acting in cinema but never will watch it again.

Taabish 6 years ago
Probably 'the most powerful' movie ever made on the topic of effects of drug use.

Dan Flemming over 6 years ago
Pray for a happy ending.

Daniel Fleming over 6 years ago
Brilliant. Supremely dark and depressing to the point where one viewing is all you need.

Frederik Værum Olesen over 6 years ago
Perfect soundtrack! Love the cinematography and the four tragic stories.

Ankit Gupta over 6 years ago
cinematography and background score are just awesome....

Rohan Nowell over 6 years ago
I found this movie so stressful to watch. It's all over the place, and quite depressing.
Requiem for a Dream is a 2000 drama film directed by Darren Aronofsky and starring Ellen Burstyn, Jared Leto, Marlon Wayans and Jennifer Connelly. The film is based on the novel of the same name by Hubert Selby, Jr., with whom Aronofsky wrote the screenplay. Burstyn was nominated for an Academy Award for Best Actress for her performance. The film was screened out of competition at the 2000 Cannes Film Festival. The film depicts different forms of addiction, leading to the characters’ imprisonment in a world of delusion and reckless desperation that is subsequently overtaken and devastated by reality. The film charts three seasons in the lives of Sara Goldfarb (Ellen Burstyn), her son Harry (Jared Leto), Harry’s girlfriend Marion Silver (Jennifer Connelly), and Harry’s friend Tyrone C. Love (Marlon Wayans). The story begins in summer; Sara Goldfarb, an elderly widow living alone in Brighton Beach, Brooklyn, spends her time watching infomercials hosted by Tappy Tibbons (Christopher...
Read more on