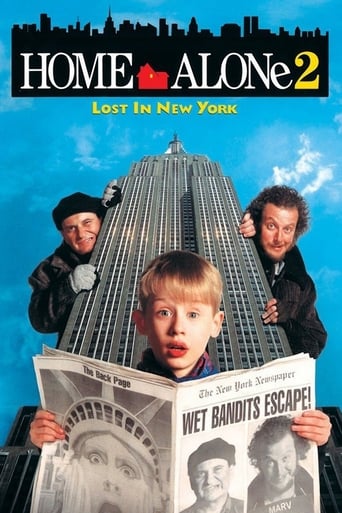 - +
Rate this film
Add a review
Delete Rating/Review Share Add to queue
In your queue
Remove it
Home Alone 2: Lost In New York 1992

Santa Meldaikytė over 6 years ago
The best part of 4. Must-see for Christmas time.

Paul Lanoue 4 years ago
easily my favorite in the series. The scenes in NYC during xmas always make me feel good.

Kelly Tyrion Robson over 5 years ago
Better than the first, love Kevin's antics at the hotel and his torture of the bad guys

Ashley Beacom over 5 years ago
Just as good as the first one :)

Justin L. Clemons almost 6 years ago
Equally as good as the first one.

Brian Richter almost 6 years ago
Loved it as a child, and still do once in a while. Maybe my favourite Home Alone movie.

Kalel over 6 years ago
Even better than the original? Maybe? I don't know. Okay, go on then, it is.

Henke over 6 years ago
A great sequal that should have end right after this one....

Daniel Jones over 7 years ago
It's the first one in a different location. Like the first, the last 20 minutes are best.

D A over 1 year ago
Home Alone 2: Lost in New York is a 1992 American Christmas comedy film written and produced by John Hughes and directed by Chris Columbus. It is the second film in the Home Alone series and the direct sequel to Home Alone. The film stars Macaulay Culkin in the lead role as Kevin McCallister, while Joe Pesci and Daniel Stern reprise their roles as the Wet Bandits. Catherine O'Hara, John Heard, Devin Ratray, Kieran Culkin, Gerry Bamman, Tim Curry, Rob Schneider, Dana Ivey, and Brenda Fricker are also featured. Eddie Bracken plays a minor role, while Ally Sheedy (who previously worked with Hughes in The Breakfast Club), Bob Eubanks, and Donald Trump make cameo appearances. The movie was filmed in Winnetka, Illinois, O'Hare International Airport in Chicago, Miami and New York City (which was star Culkin's hometown at the time). Despite receiving mostly negative reviews from critics, the film became the second most successful film of 1992, earning over $173 million in revenue in the...
Read more on