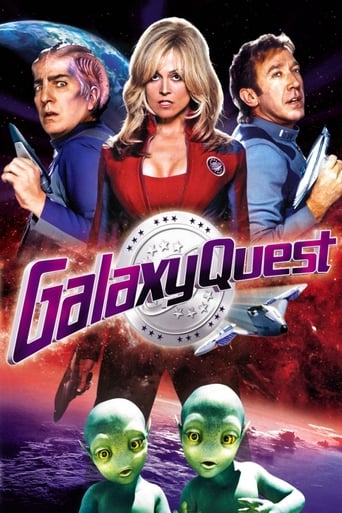 Kayley Sage almost 2 years ago
I loved this SO much more than I thought I could! Fantastic comedy

Neil Cooke over 2 years ago
Silly as a square wheel! Great laughs.

Austin over 4 years ago
Pretty solid comedy, even if the execution isn't perfect. A very fun movie.

Brandon Keck over 4 years ago
I'm not sure who is better...Rickman, Shaloub or Rockwell. Extremely quotable.

Miles Ross almost 5 years ago
One of my favorites. Still funny after a dozen times.

Zach Sly almost 6 years ago
The CGI aged poorly but the humor remains. Hilarity for all sci-fi fans.

JustinMFnTime over 6 years ago
If you love the old sci fi space series you'll love this adventurous tale.

Lindy Oates over 6 years ago
As a sci-fi movie lover, I find this parody perfect is every aspect. Love this movie.

tiailds over 6 years ago
For lighthearted scifi, this is the best around.

Fae almost 7 years ago
Silly and obviously a Star Trek parody but it was a great, funny watch.

Devon Worrell almost 7 years ago
Silly, over the top but still fun scifi with touch of parody thrown in

Guy Edwards over 7 years ago
Some of the best satire on its venerable fore bearer.

Jesse Smith over 7 years ago
Tries to parody the cheesiness of an old TV show, ends up being just cheesy.
Galaxy Quest is a 1999 science-fiction comedy parody about a troupe of human actors who defend a group of aliens against an alien warlord. It was directed by Dean Parisot and written by David Howard and Robert Gordon. Mark Johnson and Charles Newirth produced the film for DreamWorks, and David Newman composed the music score. Portions of the film were shot in Goblin Valley State Park, Utah, USA, and non-humanoid creatures were created by Stan Winston Studio from designs by Jordu Schell. The film parodies the television series Star Trek and related phenomena. It stars Tim Allen, Sigourney Weaver, Alan Rickman, Tony Shalhoub, Sam Rockwell, and Daryl Mitchell as the cast of a defunct television series called Galaxy Quest, in which the crew of a spaceship embarked on intergalactic adventures. Enrico Colantoni also stars as the leader of an alien race who ask the actors for help, believing the show's adventures were real. The film's supporting cast features Robin Sachs as the warlord,...
Read more on