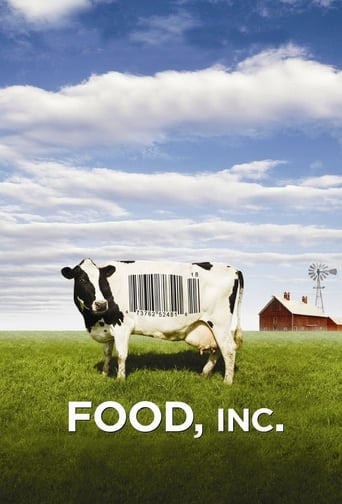 - +
Rate this film
Add a review
Delete Rating/Review Share Add to queue
In your queue
Remove it
Food, Inc. 2009

Janusz Janusz 4 years ago
Well made film. The message is the most important though. A must watch for everyone

Alexandra Sundarsingh over 4 years ago
A blunt force reminder of how dangerous and toxic the industrial food system is.

David Richard Laffan over 6 years ago
Very good and graphic. But can make you a vegetarian for a couple of days.

Ivan D'souza almost 7 years ago
Another documentary on how big business consider themselves above the law. I was educated.

Marco over 7 years ago
Not cruel and bloody enough because people still kill animals and eat meat.

Jonathan Sundqvist almost 8 years ago
Good documentary about the food industry. Well worth a watch.

Adam Hetherington almost 8 years ago
It's no "We Are Legion" - too preach'y. But good footage of US mass-food production

Alfonso Flores 8 years ago
A little bit of knowledge about what food corporations feed us.

Dylan Clites 8 years ago
A completely disgusting, but absolutely important documentary about what you eat.

Jake Boone over 2 years ago

jazoonya Bodega 3 years ago
Food, Inc. is a 2008 American documentary film directed by Emmy Award-winning filmmaker Robert Kenner. The film examines corporate farming in the United States, concluding that agribusiness produces food that is unhealthy, in a way that is environmentally harmful and abusive of both animals and employees. The film is narrated by Michael Pollan and Eric Schlosser. The film's first segment examines the industrial production of meat (chicken, beef, and pork), calling it inhumane and economically and environmentally unsustainable. The second segment looks at the industrial production of grains and vegetables (primarily corn and soy beans), again labeling this economically and environmentally unsustainable. The film's third and final segment is about the economic and legal power, such as food label laws of the major food companies, the profits of which are based on supplying cheap but contaminated food, the heavy use of petroleum-based chemicals (largely pesticides and fertilizers), and...
Read more on