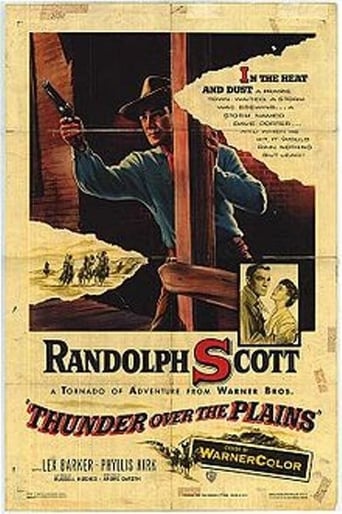 Randolph Scott, Lex Barker, Phyllis Kirk, Charles McGraw, Henry Hull
Rate this film now
Write a short review
Thunder Over The Plains is a 1953 western film directed by André de Toth and starring Randolph Scott and Lex Barker. This was the first film that Lex Barker appeared in after completing a series of 5 Tarzan films. The tag line on the original movie poster was “A tornado of adventure from Warner Bros.” Set in 1869, after the Civil War, Texas had not yet been readmitted to the Union and carpetbaggers, hiding behind the legal protection of the Union Army of occupation, had taken over the state. Federal Captain Porter (Randolph Scott), a Texan, has to carry out orders against his own people. He brings in the rebel leader Ben Westman, (Charles McGraw), whom he knows is innocent of a murder that he is accused of. In trying to prove his innocence, Porter himself becomes a wanted man.
Read more on