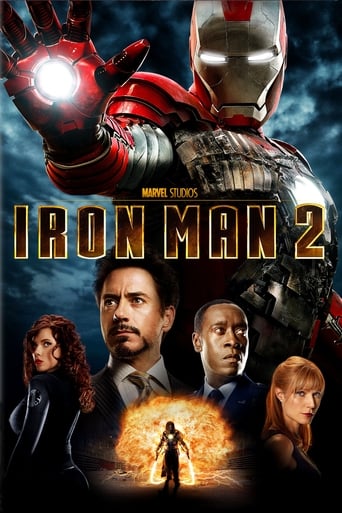 Jessica Birnie 9 months ago
One of the worst MCU films but its still an overall decent film and we get black widow.

Amanda Mathews over 3 years ago
Witty, fun and done beautifully.

Johnny Nys almost 5 years ago
I never saw this before! Funny how they handle Cheadle replacing Howard. Black Widow rules

Jared Bennett 5 years ago
Doesn't live up to the hype of the original but still alright to play in the background.

Leif Jacobson over 5 years ago
Arguably the worst of the Marvel films, still has enough to merit a watch.

Earnshaw Jean Louise over 5 years ago
Great plot, and an amazing introduction to the avengers.

ashley lee 6 years ago
Not as good as the first, but can you really top the beginnings of Iron Man? I think not.

Justin L. Clemons over 6 years ago
Good plot to protect his so-called weapon for horrible people who craves power.

Darren John over 6 years ago
A decent watch if it's on tv. Nowhere near as good as the first one.

Griffin Maurer almost 7 years ago
Bad. It's boring, horribly acted, and focuses only on introducing the avengers.

Michael Cole 7 years ago
Recognizing that alcoholism plays a huge role in the comics, I still felt it was overdone

Josh Steadman 7 years ago
Weakest of the trilogy but not bad. Rourke is a great villian. Better the 2nd time around.

Emma Jun over 7 years ago
I don't remember anything from this film except the drunken fight. What happened? Dull

Grant davies over 7 years ago
It's the man in the iron mask. Great Film

Larry Robbins over 7 years ago
Not as good as Iron man, but watchable
Iron Man 2 is a 2010 American superhero film featuring the Marvel Comics character Iron Man, produced by Marvel Studios and distributed by Paramount Pictures. It is the sequel to 2008's Iron Man, the second film in a planned trilogy and is a part of the Marvel Cinematic Universe. Directed by Jon Favreau, the film stars Robert Downey, Jr., who reprises his role as Tony Stark. In cinematic canon, it takes place six months after Iron Man, and directly before The Incredible Hulk and Thor. Stark has revealed his identity as Iron Man and is resisting calls by the United States government to hand over the technology. Ivan Vanko, meanwhile, has developed the same technology and built weapons of his own, creating new challenges for Stark. Iron Man 2 premiered in Los Angeles, California, on April 26, 2010, and was then released in 54 countries between April 28 and April 30, 2010, before going on general release in the United States on May 7, 2010. Russian television shows Stark Industries CEO...
Read more on