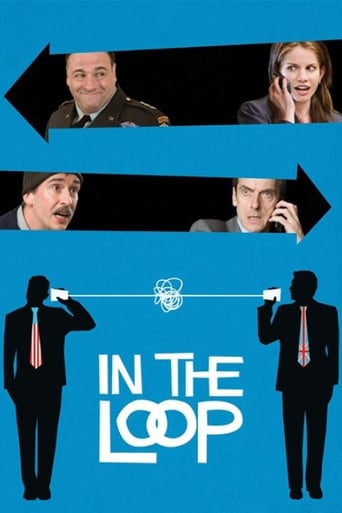 Aaron Jones over 2 years ago
From creator of Veep. Will have to rewatch— often laughing too hard to hear the next joke.

Miles Ross over 3 years ago
A solid political comedy in the vein of Doctor Strangelove.

Kam-Hung Soh over 4 years ago
Biting political satire but never rises beyond an extended episode of a TV series.

Austin over 5 years ago
Thank god for this hilarious movie.

Cody over 6 years ago
Couldn't finish it...

Dylan Clites over 7 years ago
Other than one really solid, hilarious character, I remember being kind of bored.

Christiaan Zegstroo over 7 years ago
Greatest garbage mouth ever!

Andrew Cooke over 7 years ago
lk

Míster Ansiedad over 3 years ago

Tomislav Pavicic over 3 years ago

Josh Persky over 3 years ago

Bloc Silent almost 4 years ago
In the Loop is a 2009 British satirical black comedy film directed by Armando Iannucci. It is based on the BBC Television series The Thick of It satirising Anglo-American politics in the 21st century and the Invasion of Iraq. The film was nominated for the 2010 Academy Award for Best Writing (Adapted Screenplay). In the film, the President of the United States and the Prime Minister of the United Kingdom are looking to launch a war in the Middle East. The plot follows government officials and advisors in their behind-the-scenes efforts either to promote the war or prevent it. It stars Tom Hollander, Mimi Kennedy, James Gandolfini, Chris Addison, Peter Capaldi, Anna Chlumsky, Gina McKee, Steve Coogan and David Rasche. The film is a collaboration between BBC Films and the UK Film Council. Filming took place between May 2008 and December 2008, and a world premiere was held at the Sundance Film Festival on 22 January 2009. The European gala premiere screening was held in the independent...
Read more on