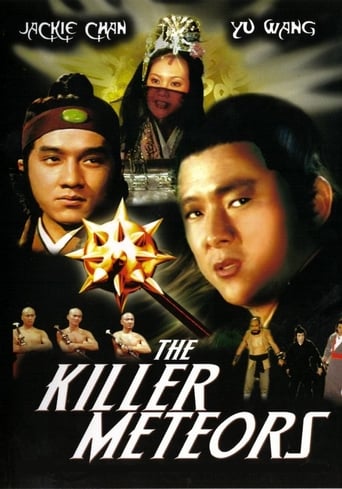 Yu Wang, Jackie Chan, Liu-li Lan, Ling Lung Yu
Rate this film now
Write a short review
Killer Meteors, (Chinese: 風雨雙流星) (or The Killer Meteors, Jackie Chan vs. Wang Yu) is a Kung Fu 1976 Hong Kong action film, directed by Jimmy Wang Yu and Lo Wei. The movie is really not a Jackie Chan movie but it was marketed as one so more people would see it. Jackie plays the villain in this film, similar to the movie Police Woman. Jackie plays Immortal Meteor, who terrorizes a small town in Hong Kong. Killer Weapon (played by Wang Yu, who was a star back then) sets out to stop Immortal Meteor. Although the film was made in 1976, it would be two years before the movie was actually released.
Read more on