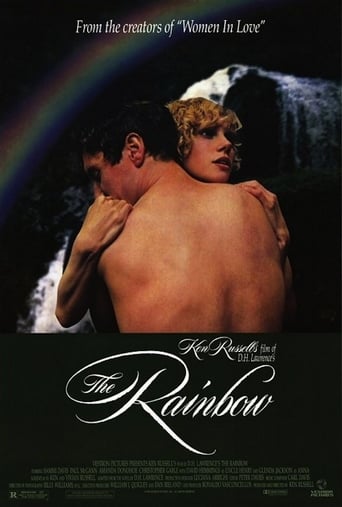 Sammi Davis, Paul McGann, Amanda Donohoe, Christopher Gable, David Hemmings
Rate this film now
Write a short review
The Rainbow is a 1989 drama film directed by Ken Russell. The story, adapted from the D. H. Lawrence novel, is a prequel to Lawrence's Women in Love, which was also made into a film by Russell in 1969. Sammi Davis stars as "Ursula", a sheltered young schoolteacher who's taken under the wing (sexually and otherwise) by the more sophisticated "Winifred" (Amanda Donohoe). Glenda Jackson appears as the mother of the character she played in Women in Love. Leonard Maltin commented that "Many beautiful and striking moments don't quite gel, but still worth watching." The film is available on DVD in the United Kingdom, but as of 17 January 2010, Lions Gate has yet to announce any plans for a region 1 DVD release.
Read more on