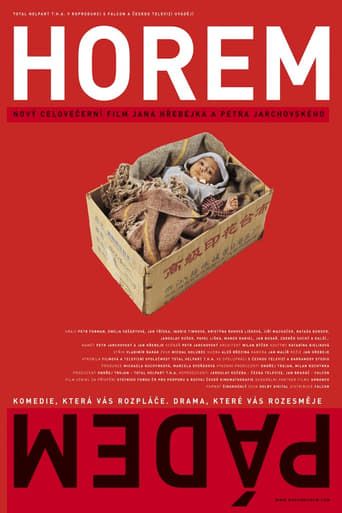 Jirí Machácek, Petr Forman, Jan Tříska, Emília Vášáryová, Nataša Burger
Rate this film now
Write a short review
Up and Down (Czech: Horem pádem) is a 2004 Czech comedy film directed by Jan Hřebejk. The film first premiered in France at the Cannes Film Market on May 19, 2004. The film was the Czech Republic's submission to the 77th Academy Awards for the Academy Award for Best Foreign Language Film, but was not accepted as a nominee. Milan and Goran are two criminals who smuggle illegal immigrants. One night after they complete a smuggle, they discover that one of the immigrants has left a baby behind. Milan and Goran decide to sell the baby to Lubos and Eman, who are responsible for running an illegal baby adoption center. Lubos and Eman make attempts to sell the baby to Miluska and Frantisek, a barren couple. Czech Lion Pilsen Film Festival
Read more on