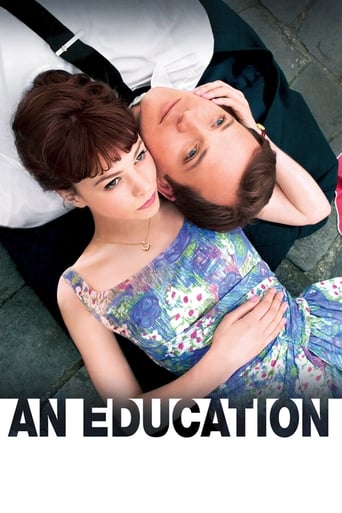 Cory Van Dorn over 6 years ago
A girl hurts people emotionally while growing up in a creepy weird way. Some good points!

Nacho Reyes over 6 years ago
Be smart playing being cleaver

Aileen Davis over 6 years ago
OK

Dylan Clites over 7 years ago
Mulligan is completely flawless in this role. Interesting story, didn't love the ending.

Anj Bantiles over 7 years ago
A little twisted, a little sickening, a little too good.

Ashleigh Louise Klaassen over 1 year ago

Lindsay Scholtes over 2 years ago

Alan DeCoronado over 3 years ago

vics 4 years ago
An Education is a 2009 British coming-of-age drama film, based on an autobiographical article in Granta by British journalist Lynn Barber. The film was directed by Lone Scherfig from a screenplay by Nick Hornby, and stars Carey Mulligan as Jenny, a bright schoolgirl, and Peter Sarsgaard as David, the charming Jewish conman who seduces her. The film was nominated for three Academy Awards in 2009 including Best Picture and Best Actress for Carey Mulligan. An Education premiered at the 2009 Sundance Film Festival to critical acclaim. It screened on 10 September 2009 at the Toronto International Film Festival and was featured at the Telluride by the Sea Film Festival in Portsmouth, New Hampshire, on 19 September 2009. The film was shown on 9 October 2009, at the Mill Valley Film Festival. It was released in the US on 16 October 2009 and in the UK on 30 October 2009. In 1961 London, Jenny Mellor is a 16-year-old schoolgirl, on track to enter Oxford University when she meets a charming...
Read more on