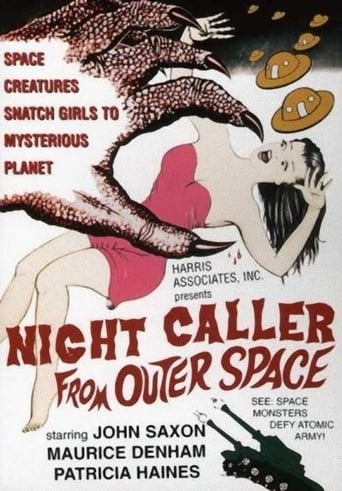 John Saxon, Maurice Denham, Patricia Haines, Stanley Meadows, Ballard Berkeley
Rate this film now
Write a short review
Night Caller from Outer Space, also known as simply The Night Caller or Blood Beast from Outer Space, is a British 1965 science fiction film directed by John Gilling. It is based on Frank Crisp's novel The Night Callers. American scientist Jack Costain (John Saxon) and his aides investigates a meteorite in the English countryside, discovering that it is an alien device from Ganymede, a moon of Jupiter. They capture a tall alien and take it to the lab, only to have it escape. Shortly thereafter, teenage girls begin disappearing after answering an advertisement for 'Bikini Girl' magazine. It turns out the aliens want Earth women for breeding purposes, a now very dated sci-fi plot device. Leonard Maltin called it a "well-done sci-fi thriller" and rated it as two and a half stars. Author Steve Puchalski said, "this alleged 'film' is dry and slow paced, uninvolving and uninspiring". Features the hit instrumental song "Image" as it's theme.
Read more on