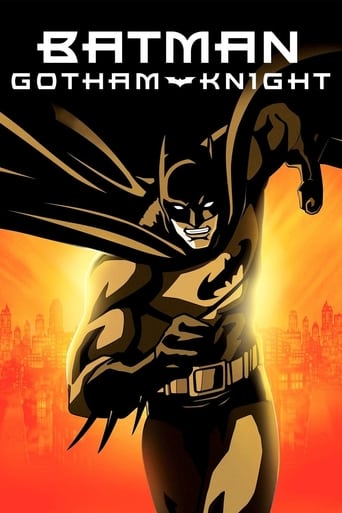 - +
Rate this film
Add a review
Delete Rating/Review Share Add to queue
In your queue
Remove it
Batman: Gotham Knight 2008

Ezequiel Castellanos over 4 years ago
animatrix meets batman. I liked it. the "legend" of batman.

Lucas Silva-Myles over 7 years ago
good design exercise, but thin plot leaves it pale comparison to Animatrix.'Pain' good tho

Ben Calverley almost 8 years ago
A bit of style over substance but it sure does look pretty.

Dylan Clites almost 8 years ago
It's not what it advertises to be at all. Just a stupid, independent, anime film.

oscar diaz over 4 years ago

Innes Maas over 4 years ago

István Földházi over 5 years ago

Jake Boone over 6 years ago

Gabi Lener over 6 years ago

Antonio Schonarth over 7 years ago

Sara Kaddouri over 7 years ago
Batman: Gotham Knight (バットマン: ゴッサムナイト, Battoman: Gossamu Naito) is a 2008 direct-to-DVD animated superhero anthology film of six animated short films set in-between Batman Begins and The Dark Knight. It depicts Batman battling against the mob of Gotham City, as well as other villains. The producers have acknowledged that it is not necessarily meant to be canon to the "Nolanverse," and indeed any of the six segments could easily fall into almost any Batman continuity. The shorts, or segments, are written by Josh Olson, David S. Goyer, Brian Azzarello, Greg Rucka, Jordan Goldberg and Alan Burnett. Although all based on Japanese anime art style, each segment has its own writing and artistic style, just as the works from the DC Universe, and with the same style of The Animatrix although some segments are connected. All six films of the feature star Kevin Conroy, reprising his voice role as Batman from the DC Animated Universe. It is similar to another tie-in, The Animatrix, as both are...
Read more on