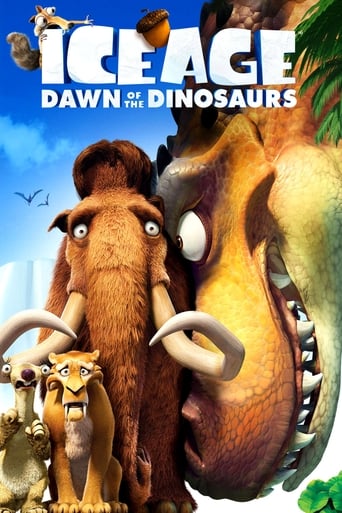 - +
Rate this film
Add a review
Delete Rating/Review Share Add to queue
In your queue
Remove it
Ice Age: Dawn of the Dinosaurs 2009

Johnny Nys over 6 years ago
Sorry, hardly a laugh out of this movie for me ... Not even Scrat was that funny.

Kash Rajdeo over 6 years ago
The "Buck" Character was Amazing and overall entertainment Galore.

Rowan Humphreys over 6 years ago
1: was great 2:was bad 3:was soooo terrible i am lost for words!

Fabio Vanegas over 6 years ago
Very funny this third movie

Dylan Clites over 7 years ago
Yeah. This is not a good movie. Stretching the story out way too thin. Needs to stop now.

Sanat Gersappa over 7 years ago
Love the dialogs. Hilarious.

Tim Jules Hull over 7 years ago
The squirrels and possums are great side stories, but the main thread is tedious.

Isaac Matthew over 7 years ago
Why are there dinosaurs? we saw humans in the first movie, this doesn't make sense

Rebecca over 1 year ago

dayana over 1 year ago

Daniela Gómez Silva almost 2 years ago
Ice Age: Dawn of the Dinosaurs, also known as Ice Age 3, is a 2009 3-D computer animated film. It is the third installment of the Ice Age series, produced by Blue Sky Studios and distributed by 20th Century Fox. The film features the voices of Ray Romano, John Leguizamo, Denis Leary, Queen Latifah, Seann William Scott, Josh Peck, Simon Pegg, and Chris Wedge. The story has Sid being taken by a female Tyrannosaurus rex after stealing her eggs, leading the rest of the protagonists to rescue him in a tropical lost world inhabited by dinosaurs beneath the ice. Despite receiving mixed reviews from critics, Dawn of the Dinosaurs is the fourth highest grossing animated film of all time with $886.7 million worldwide, behind only Toy Story 3 with $1.063 billion, The Lion King with $920.9 million and Shrek 2 with $919.8 million. Ellie (Queen Latifah) and Manny (Ray Romano) are expecting their first child, and Manny is obsessed with making life perfect and safe for the family, since his first...
Read more on