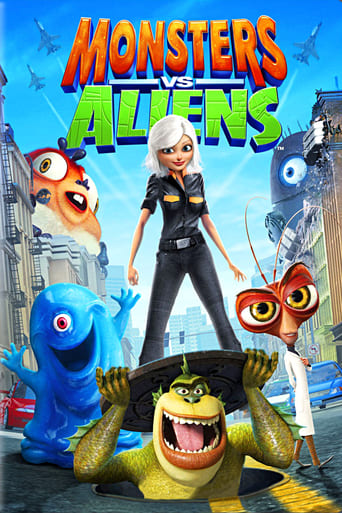 Eric Brainard 9 months ago
Lot of stars gave their voice for this one & it was worth it. It's a good animated film.

Luke Duncan 2 years ago
Decently entertaining and funny for one watch.

Johnny Nys over 4 years ago
What a laugh! Third time I've seen this, and it keeps getting better.

Jane Kenney almost 7 years ago
Fun family movie that will have your kids watching it again and again. Hilarious.

Todor Mollov over 7 years ago
Would watch it again with the children. They like it too.

Michael Cole over 7 years ago
A decent family film with enough humor to provide fun for the whole family.

Nate McBean over 7 years ago
Loved the massive creature, the rest was mediocre. Good at the time? 12/8/2009

Richard Lipovsky almost 8 years ago
Cute movie, good fun, but they did a much better job with how to train your dragon!

Jaimie over 2 years ago
Monsters vs. Aliens is a 2009 American computer-animated 3-D science fiction film produced by DreamWorks Animation and distributed by Paramount Pictures. The computer-animated movie was the first to be directly produced in a stereoscopic 3-D format instead of being converted into 3-D after completion, which added $15 million to the film's budget. The film was scheduled for a May 2009 release, but the release date was moved to March 27, 2009. It was released on DVD and Blu-ray September 29, 2009 in North America and included the easter egg to the upcoming movies and previews. Monsters vs. Aliens features the voices of Reese Witherspoon, Seth Rogen, Hugh Laurie, Will Arnett, Conrad Vernon, Rainn Wilson, Kiefer Sutherland, Stephen Colbert, and Paul Rudd. Bride-to-be Susan Murphy (Reese Witherspoon) is hit by a meteorite on her wedding day to weather reporter Derek Dietl (Paul Rudd), causing her to absorb a substance called quantonium and grow into a giantess. Alerted to the meteorite...
Read more on