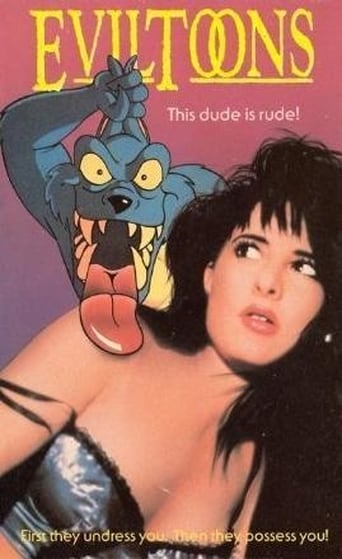 Andrew Hill over 7 years ago

Daniel Troma Johnsson almost 8 years ago
Evil Toons is a 1992 live-action/animated Comedy-Horror B-movie directed by Fred Olen Ray. The film is a light spoof of traditional haunted-house films. A group of teenage girls must spend the night in an old house in order to receive a minor amount of money. On the night of their arrival, a strange man arrives at the house, delivering an old book. Once he is gone, the girls examine the book, where they find a sketch of a wolf-like monster. As time passes, the drawing emerges from the book and becomes a Toon. Whilst its intention is to purge the house of its occupants, it also displays licentious behaviour, seemingly trying to sexually abuse the girls whilst performing its task. At one point, after attacking one of the girls, it possesses her; this plot device ostensibly being for purpose of replacing an expensive special effect (the mix of live action and animation) with cheaper make-up effects. On 4 May 2010 Infinity Entertainment Group released the 20th Anniversary Edition on DVD.
Read more on