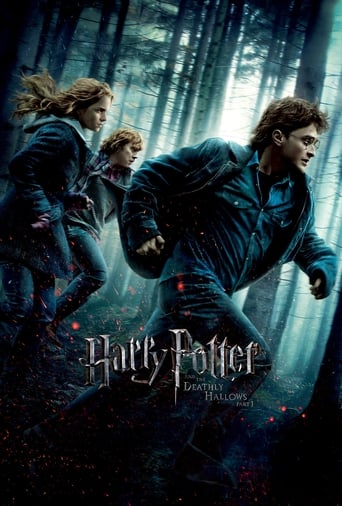 - +
Rate this film
Add a review
Delete Rating/Review Share Add to queue
In your queue
Remove it
Harry Potter and the Deathly Hallows: Part 1 2010

Amanda Mathews over 3 years ago
Epic.

Katy Eller over 4 years ago
You can tell when Dan Ratcliff had been drinking. His acting is very bad in parts.

Marc Hyde almost 5 years ago
A lot of people gush, but the middle third is incredibly boring.

Michael Cole 5 years ago
Why does Hermione even need the other two?

Ashley Beacom 6 years ago
a bit tedious in places, but it's ok; it's Harry Potter :)

Bruno Ferreira Machado over 6 years ago
Kinda slow and boring at times.

Mobina 7 years ago
Please watch this movie it is great.

Luna Lovegood 7 years ago
<3 <3 <3 It's perfect and even Radcliff almost seems to be acting.

Robyn Hamilton 7 years ago
A good start to The Deathly Hallows but its second half far outshines it.

Charlie Gleason 7 years ago
The pacing only serves to build the tension for the blistering conclusion of part 2.

georgie over 7 years ago
i just died when i watched this. BRILLIANT

Daune Kramer almost 8 years ago
The too-much-sitting-in-tents moping around part of the book. Love part 2 VERY much

Lino Monteiro 8 years ago
A fine, gripping premise to the ensuing finale.

Dylan Clites 8 years ago
One of the best HP movie. Heartbreaking. Suffers slightly from being half of a film.
Harry Potter and the Deathly Hallows – Part 1 is a 2010 fantasy film directed by David Yates and the first of two films based on the novel of the same name by J. K. Rowling. It is the seventh instalment in the Harry Potter film series, written by Steve Kloves and produced by David Heyman, David Barron and Rowling. The story follows Harry Potter on a quest to find and destroy Lord Voldemort's secret to immortality – the Horcruxes. The film stars Daniel Radcliffe as Harry Potter, alongside Rupert Grint and Emma Watson as Harry's best friends Ron Weasley and Hermione Granger. It is the sequel to Harry Potter and the Half-Blood Prince and is followed by the concluding film, Harry Potter and the Deathly Hallows – Part 2. Principal photography began on 19 February 2009 (2009-02-19) and was completed on 12 June 2010 (2010-06-12). Part 1 was released in 2D cinemas and IMAX formats worldwide on 19 November 2010. In the film's worldwide opening weekend, Part 1 grossed $330 million, the third...
Read more on