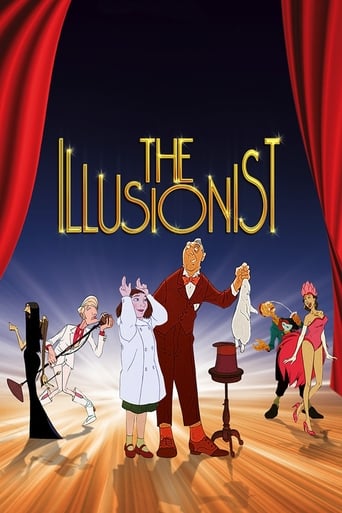 ZZ 5 months ago
a palpable mood and feeling, very interesting details of the ordinary & the changing time

Jonathan Evans 4 years ago
An artist's dignity fades away in a world that no longer cares, no matter where he goes.

amina zadeh almost 7 years ago
A hand drawn animation that is great for all ages.

Mark Stanley-Adams over 7 years ago
Chomet does it again with a tribute to Jaques Tati that Tati would have been proud of.

Anne almost 8 years ago
A very moving film, I fell in love with all the characters. And the animation, so good

Annalisa Schettino over 2 years ago

Alexis Zofia Kubicki over 3 years ago

Gabriel Becker over 3 years ago

Neil Loamas over 4 years ago

y kaz over 4 years ago

Rab Vigil almost 5 years ago
The Illusionist (French: L'Illusionniste) is a 2010 British-French animated comedy-drama film directed by Sylvain Chomet. The film is based on an unproduced script written by French mime, director and actor Jacques Tati in 1956. Controversy surrounds Tati's motivation for the script, which was written as a personal letter to his estranged eldest daughter, Helga Marie-Jeanne Schiel in collaboration with his long-term writing partner Henri Marquet, between writing for the films Mon Oncle and Play Time. The main character is a version of Tati animated by several people under the lead of Laurent Kircher. The plot revolves around a struggling illusionist who visits an isolated community and meets a young lady who is convinced that he is a real magician. Originally intended by Tati to be set in Czechoslovakia, Chomet relocated the film to Scotland in the late 1950s. According to the director, "It's not a romance, it's more the relationship between a dad and a daughter." Sony's US press kit...
Read more on