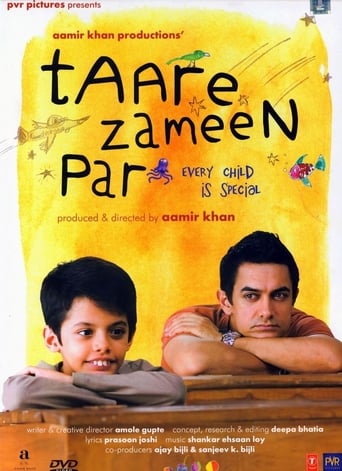 Rachelina Larasati over 5 years ago
teachers, students, parents, you should watch this!

Imane El Mariami 6 years ago
I'm dyslexic, I experienced all the pain portrayed in this film, it was amazingly done.

Kiera Beddes over 6 years ago
Heartwarming story about a boy with dyslexia and the teacher that finally helped him.

Ivan D'souza almost 7 years ago
Sensitive story of a normal but different child. Will benefit any parent to see the movie.

Ahmed Omara over 6 years ago

Shruti Mishra over 7 years ago

Nimal - நிமல் over 8 years ago

Munish Gupta over 8 years ago

Oscar Alcalde over 8 years ago

Mrugesh Karnik over 8 years ago

Mahesh Arandara 9 years ago
Taare Zameen Par (Hindi: तारे ज़मीन पर, translation: Stars on Earth) is a 2007 Bollywood drama film directed by Aamir Khan, written by Amole Gupte, and produced by Aamir Khan Productions. Gupte initially developed the idea with his wife Deepa Bhatia, who served as the film's editor. Visual effects were created by Tata Elxsi's Visual Computing Labs, and the title animation—the first use of claymation in a Bollywood film—was created by Dhimant Vyas. Shankar–Ehsaan–Loy composed the film's score, and Prasoon Joshi wrote the lyrics for many of the songs. Principal photography took place in Mumbai and in Panchgani's New Era High School, and some of the school's students make appearances. The film explores the life and imagination of eight-year-old Ishaan (Darsheel Safary). Although he excels in art, his poor academic performance leads his parents to send him to a boarding school. Ishaan's new art teacher (Aamir Khan) suspects that he is dyslexic, and helps him to overcome his disability....
Read more on