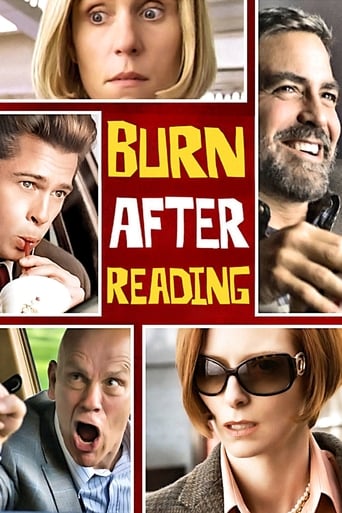 Pamela Murray almost 3 years ago
Not all that memorable, but fun.

Nat Voisey over 5 years ago
This was a weird movie, and it stopped so suddenly. Worth a watch. Not worth $5.99 nzd.

René Stalder 6 years ago
I'm so fucking in love with Brad Pitt in his role. Genius funny and authentic.

Kosala Liyanage 6 years ago
Not entirely sure what this was about, but it was entertaining.

Cory Van Dorn 7 years ago
What the hell happened in this film. Some funny parts and succeeded in the end.

Sydney Shaw over 7 years ago
By the time that the plot starts the movies over. But it's funny, and has good actors.

Lina Madita over 7 years ago
This is the one movie, in which Brad Pitt convinced me, that he really is a great actor.

Evey Hammond almost 8 years ago
I haven't laughed so hard in a long time, my type of a perfect comedy :)

Mark Stanley-Adams over 8 years ago
Not my favourite Coen Bros. film, if I'm honest.. but still better than many other's best

Stephen Jones over 8 years ago
Funny as hell along with brutal, crass and tragi-comic, like Fargo w/ spies & morons

Jacob Hernandez over 8 years ago
This spirited almost-satire shines with Coen-y brilliance and delightful acting.

wayupnorth over 8 years ago
Great plot. Great cast. Funny stuff!
Burn After Reading is a 2008 black comedy film written, produced, and directed by Joel and Ethan Coen. The film stars George Clooney, John Malkovich, Frances McDormand, Tilda Swinton, Richard Jenkins, and Brad Pitt. It was released in the United States on September 12, 2008, and it was released on October 17, 2008 in the United Kingdom. The film had its premiere on August 27, 2008, when it opened the 2008 Venice Film Festival. Faced with a demotion at work due to a drinking problem, Osbourne Cox (John Malkovich) quits his job as a CIA analyst and resolves to write a memoir about his life and career. When his pediatrician wife Katie (Tilda Swinton) finds out, she sees it as a justifiable opportunity to file for divorce and continue her extramarital affair unimpeded. Taking her lawyer's advice, she copies financial records and several other files from her husband's computer onto a CD. When the CD gets left on the locker room floor of Hardbodies, a local gym, by a careless law firm...
Read more on