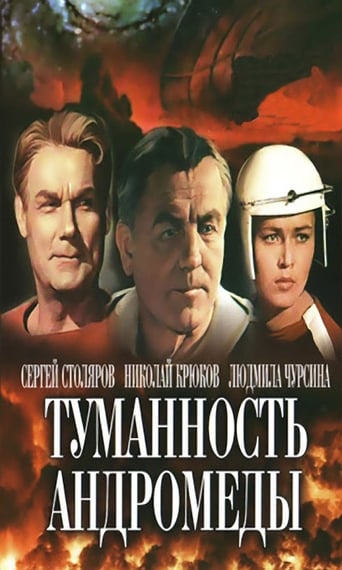 Sergei Stolyarov, Vija Artmane, Nikolai Kryukov, Tatyana Voloshina
Rate this film now
Write a short review
The Andromeda Nebula (Russian: Туманность Андромеды) is a 1967 Russian Science fiction film starring Sergei Stolyarov and directed by Yevgeni Sherstobitov. The film was originally intended to be the first episode of a series of films but the remaining parts were never made. De facto name — The Andromeda Nebula: Episode I. Prisoners of the Iron Star. It is based upon the Andromeda Nebula novel by Ivan Yefremov and follows the story of a group of humans on the spaceship Tantra who are tasked with investigating the home planet of an alien race. They discover that artificial radioactivity has killed almost all life on that planet. During the voyage home the ship is trapped by the gravitational force of an Iron Star and lands on a planet orbiting the star. Surrounded by predators who destroy human nervous system through space suits, the crew has to fight to see Earth again.
Read more on