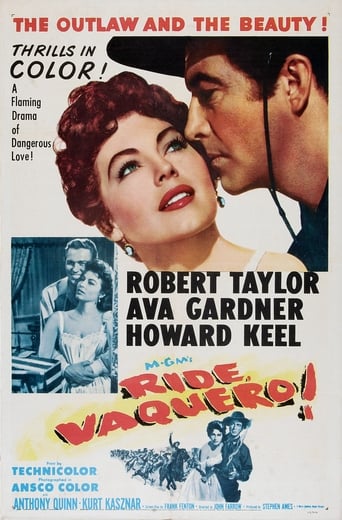 1
0
0
Rate this film
Add a review
Delete Rating/Review Share Add to queue
In your queue
Remove it
Ride, Vaquero! 1953

Robert Taylor, Ava Gardner, Howard Keel, Anthony Quinn, Kurt Kasznar
Rate this film now
Write a short review
Ride, Vaquero! is a 1953 western film made by Metro-Goldwyn-Mayer (MGM). It was directed by John Farrow and produced by Stephen Ames from a screenplay by Frank Fenton and John Farrow. The music score was by Bronislau Kaper and the cinematography by Robert Surtees. The film stars Robert Taylor, Ava Gardner, Anthony Quinn, and Howard Keel with Kurt Kasznar, Ted de Corsia and Jack Elam. Movita appears uncredited in a small role.
Read more on