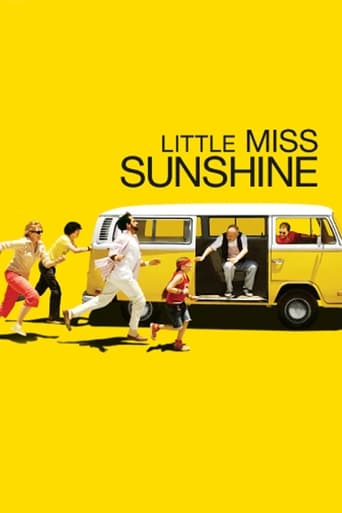 Natalie 1 year ago
It was such a good movie, very funny and amusing, and also a pretty clever film too.

Mark almost 5 years ago
Best performance by Alan Arkin you will ever see, he steals the movie.

Ryan Boucher 5 years ago
A masterclass in knocking characters down.

Johnny Nys over 5 years ago
Keeps getting better. Laughed myself to tears.

Lino Monteiro over 6 years ago
This one is definitely a winner. Quirky, funny, and with a lot of heart.

Griffin Maurer almost 7 years ago
It's wacky, the humor is dry, and the characters are lovable. Iconic scenes throughout.

Lorenzo Storani over 7 years ago
she is amazing stripping

Evan Caldwell over 7 years ago
Hilarious and emotionally endearing with a phenomenal soundtrack to boot.

Frankie Linus over 7 years ago
Love it. Fresh, funny, great soundtrack. It's one of those films where the losers win.

Jonathan Evans over 7 years ago
More than a critique on the stupidity of child beauty pageants. A cute tale about passion.

Robyn Hamilton over 7 years ago
Typical family dysfunction in a nutshell. Great soundtrack too.

Kakra almost 8 years ago
6.5/10
Little Miss Sunshine is a 2006 American comedy-drama film. The road movie's plot follows a family's trip to a children's beauty pageant. Little Miss Sunshine was the directorial film debut of the husband-wife team of Jonathan Dayton and Valerie Faris. The screenplay was written by first-time writer Michael Arndt. The movie stars Greg Kinnear, Steve Carell, Toni Collette, Paul Dano, Abigail Breslin, and Alan Arkin, and was produced by Big Beach Films on a budget of US$8 million. Filming began on June 6, 2005 and took place over 30 days in Arizona and Southern California. The film premiered at the Sundance Film Festival on January 20, 2006, and its distribution rights were bought by Fox Searchlight Pictures for one of the biggest deals made in the history of the festival. The film had a limited release in the United States on July 26, 2006, and later expanded to a wider release starting on August 18. Little Miss Sunshine received critical acclaim and had an international box office...
Read more on