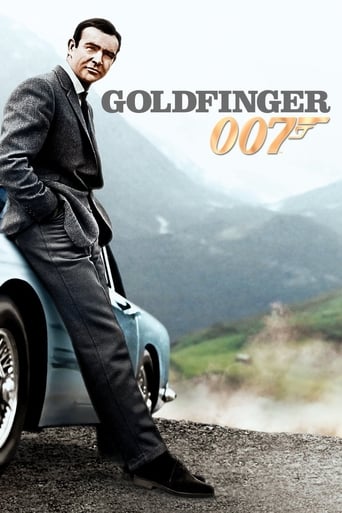 Dónal Kennedy over 2 years ago
Yes it's misogynistic & no Connery can't act, but it's bloody good fun

Daniel Jones over 3 years ago
Among my absolute favorite Bond films.

Adam Connell over 6 years ago
Quite possibly the best Bond film of them all; the source of all things truly "Bond".

Devin Bruce over 6 years ago
Watching this as an adult, I am amazed at how well-liked it is when Bond does NOTHING.

Jonathan Evans almost 7 years ago
No Mr Bond, I expect you to die!

Andrew Sharp 7 years ago
Arguably the best Bond, with the most classic moments, and the DB5!

Taylor Reginald Wright over 7 years ago
The classic film that established the James Bond formula with truly unforgettable images.

Dorian Silenus over 7 years ago
Sean Connery is arguably the second-best bond ever.

Nate McBean over 7 years ago
Do you expect me to talk? No mister Bond, I expect you to die. Great villain, great bond.

Kenneth Chisholm over 7 years ago
Bond at the series' best with a screenplay easily outdoing the original book.

Peter Renshaw over 7 years ago
Honor Blackman did all her own fight sequences. See more here ~ http://bit.ly/UcGZYu

Vickie Ehlers Cyr over 7 years ago
He'll always be my Bond!

Renard Bansale over 7 years ago
Probably the quintessential Bond flick. It isn't expected to talk, but expected to die!!

David McKinstry almost 8 years ago
Almost all Bond movies are highly re-watchable....but i have a biased opinion

Ben Hoskings 8 years ago
The 1960s were really something special.

Rachel Marshall 1 year ago
Goldfinger is the third spy film in the James Bond series and the third to star Sean Connery as the fictional MI6 agent James Bond. Released in 1964, it is based on the novel of the same name by Ian Fleming. The film also stars Honor Blackman as Bond girl Pussy Galore and Gert Fröbe as the title character Auric Goldfinger, along with Shirley Eaton as famous Bond girl Jill Masterson. Goldfinger was produced by Albert R. Broccoli and Harry Saltzman and was the first of four Bond films directed by Guy Hamilton. The film's plot has Bond investigating gold smuggling by gold magnate Auric Goldfinger and eventually uncovering Goldfinger's plans to attack the United States Bullion Depository at Fort Knox. Goldfinger was the first Bond blockbuster, with a budget equal to that of the two preceding films combined. Principal photography occurred from January to July 1964 in the United Kingdom, Switzerland and the American states of Kentucky and Florida. The release of the film led to a number of...
Read more on