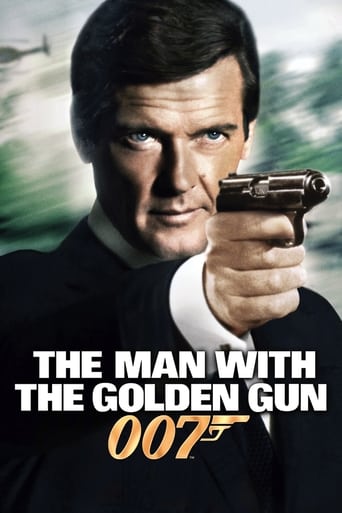 Dónal Kennedy 3 years ago
Bond-by-numbers. A sprinkling of iconic moments, most involving Lee.

Michael Cole 4 years ago
How important to the plot was it to give Christopher Lee a third nipple? Answer: very.

Dylan Clites 8 years ago
My least favorite Bond film. What could've been a cool villain ends up super lame.

Janika Puolitaival over 1 year ago

Liam Swann over 4 years ago

Scott Hume over 4 years ago

Rafael Santos 5 years ago
The Man with the Golden Gun (1974) is the ninth spy film in the James Bond series and the second to star Roger Moore as the fictional MI6 agent James Bond. A loose adaptation of Ian Fleming's novel of same name, the film has Bond sent after the Solex Agitator, a device which can harness the power of the sun, while facing the assassin Francisco Scaramanga, the "Man with the Golden Gun". The action culminates in a duel between them that settles the fate of the Solex. The Man with the Golden Gun was the fourth and final film in the series to be directed by Guy Hamilton. The script was written by Richard Maibaum and Tom Mankiewicz. The film was set in the face of the 1973 energy crisis, a dominant theme in the script—Britain had still not yet fully overcome the crisis when the film was released in December 1974. The film also reflects the then popular martial arts film craze, with several kung-fu scenes and a predominantly Asian location, being shot in Thailand, Hong Kong and Macao. The...
Read more on