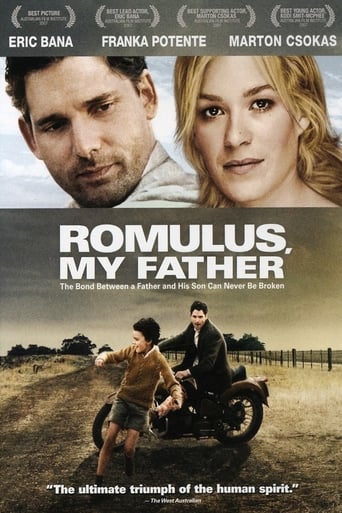 - +
Rate this film
Add a review
Delete Rating/Review Share Add to queue
In your queue
Remove it
Romulus, My Father 2007

Antonia Teodora over 7 years ago

Peter Gray over 7 years ago
Romulus, My Father is a 2007 Australian drama film directed by Richard Roxburgh. Based on the memoir by Raimond Gaita, the film tells the story of Romulus (Eric Bana) and his wife Christine (Franka Potente), and their struggle in the face of great adversity to raise their son, Raimond (Kodi Smit-McPhee). The film marks the directorial debut for Australian actor Richard Roxburgh. It was commended in the Australian Film Critics Association 2007 Film Awards. Romulus, My Father grossed $2,589,674 at the box office in Australia.
Read more on