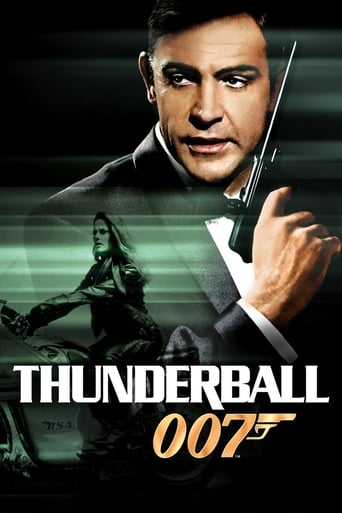 Michael Cole over 3 years ago
I feel like the cast just wanted an excuse to do a lot of scuba diving.

Daniel Jones over 6 years ago
This is the Bond movie where he truly becomes the Bond we know and love.

Nate McBean almost 7 years ago
Lots of slow underwater stuff. Now I understand a lot of the austin powers chars though!

Dylan Clites over 7 years ago
The first Bond film that I wasn't crazy about. The whole scuba diving sequence is boring.

István Földházi 4 years ago
Thunderball (1965) is the fourth spy film in the James Bond series after Dr. No (1962), From Russia with Love (1963) and Goldfinger (1964), and the fourth to star Sean Connery as the fictional MI6 agent James Bond. It is an adaptation of the novel of the same name by Ian Fleming, which in turn was based on an original screenplay by Jack Whittingham. It was directed by Terence Young with screenplay by Richard Maibaum and John Hopkins. The first 007 movie to be filmed in Panavision. The film follows Bond's mission to find two NATO atomic bombs stolen by SPECTRE, which holds the world ransom for £100 million in diamonds, in exchange for not destroying an unspecified major city in either England or the United States (later revealed to be Miami). The search leads Bond to the Bahamas, where he encounters Emilio Largo, the card-playing, eye-patch wearing SPECTRE Number Two. Backed by the CIA and Largo's mistress, Bond's search culminates in an underwater battle with Largo's henchmen. The...
Read more on