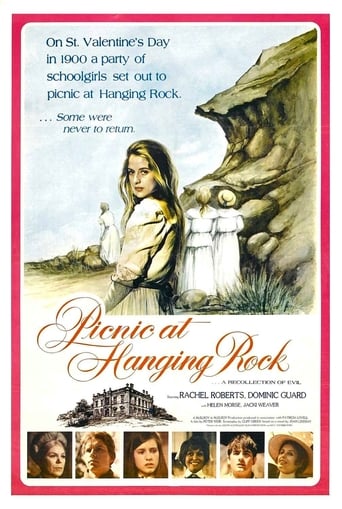 Austin over 6 years ago
An impenetrable film unlike anything else.

nathanaelgrey over 7 years ago
dream pop as a movie, mysterious events during a picnic

Tim Jules Hull almost 8 years ago
Excruciatingly tedious and as wooden as a petrified tree.

frank mint over 5 years ago

gio over 6 years ago

Ed Wong over 6 years ago

Darren O'Shanassy over 7 years ago

Sebastian Haselbeck over 7 years ago

Amy Elle over 7 years ago

Alex Holroyd over 8 years ago

Tyler Belk over 8 years ago

Mark Ryall over 8 years ago

Bec Andrews over 8 years ago
Picnic at Hanging Rock is a 1975 Australian feature film directed by Peter Weir and starring Anne-Louise Lambert, Helen Morse, Rachel Roberts and Vivean Gray. The film is adapted from the novel of the same name, by author Joan Lindsay. The film relates the story of the disappearance of several schoolgirls and their teacher during a picnic to Hanging Rock on St. Valentine's Day in 1900, and the subsequent effect on the local community. The students at private girls school Appleyard College are dressing on the morning of St. Valentine's Day, 1900. Several of the girls, including Miranda (Anne-Louise Lambert), Irma (Karen Robson), Marion (Jane Vallis), Rosamund (Ingrid Mason), waifish Sara (Margaret Nelson) and outsider Edith (Christine Schuler) read poetry and Valentine's Day cards. The group prepare for a picnic to Hanging Rock, accompanied by the remote mathematics mistress Miss Greta McCraw (Vivean Gray) and the young and beautiful Mademoiselle de Poitiers (Helen Morse). Sara is...
Read more on