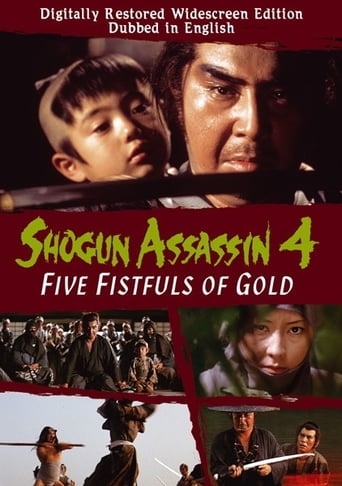 2
2
0
Rate this film
Add a review
Delete Rating/Review Share Add to queue
In your queue
Remove it
Shogun Assassin 4: Five Fistfuls of Gold 1973

Tom Meier over 8 years ago
Lone Wolf and Cub: Baby Cart in Land of Demons (Japanese: 子連れ狼 冥府魔道 or Kozure Ōkami: Meifumando, literally Wolf with Child in Tow: Crossroads to Hell) is the fifth in a series of six Japanese martial arts films based on the long-running Lone Wolf and Cub manga series about Ogami Ittō, a wandering assassin for hire who is accompanied by his young son, Daigoro. Ogami is tested by five messengers, each who try to kill him. After defeating all the messengers, Ogami learns he must kill a young girl who was raised as a boy and is intended to be the heir of a local daimyo, while the real heir, a little boy, is kept locked away. In addition to murdering the senile, old lord, his concubine and the girl, Ogami must stop a document revealing the deception from reaching the hands of his mortal enemy, Yagyū Retsudō. Meanwhile, Ogami Daigoro is again separated from his father and proves his courage and sense of honor as he refuses to admit the guilt of a woman pickpocket he became mixed up with.
Read more on