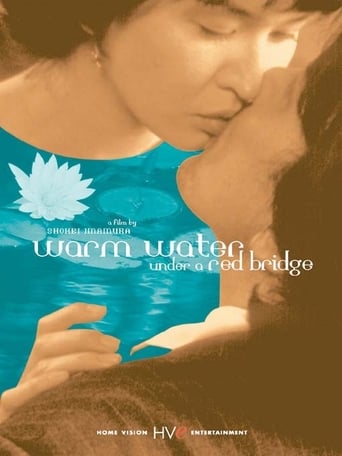 Kōji Yakusho, Misa Shimizu
Rate this film now
Write a short review
Warm Water Under a Red Bridge (赤い橋の下のぬるい水, Akai Hashi no Shita no Nurui Mizu) is a 2001 Japanese film by director Shōhei Imamura. This was Imamura's last feature film. It was entered into the 2001 Cannes Film Festival. Warm Water Under A Red Bridge focuses on the troubles of a Japanese "everyman" who finds a new life with an unusual woman in a small fishing village. Imamura's last film contains considerable commentary on the search for happiness. This romantic comedy tells the story of a salary man who has been laid off from his job at an architectural firm in Tokyo and is undergoing marital difficulties. When his old friend dies, he travels to the small fishing town of Himi Toyama Prefecture to find a treasure that the old man had hidden in a house there decades before. He does not find what he expects, but takes a job with local fishermen and becomes romantically involved with a woman with an exaggerated proclivity towards female ejaculation.
Read more on