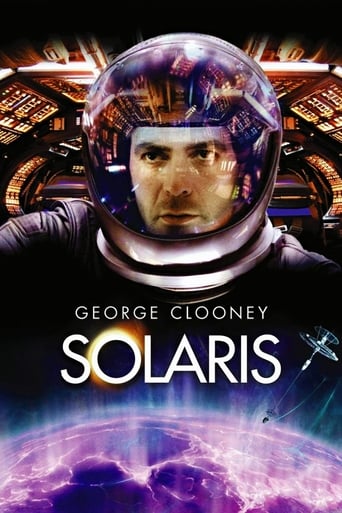 Janusz Janusz over 3 years ago
I think that the novel was amazing, this is a so so adaptation. I like what the did though

Adam Meehan over 5 years ago
Good but the tension didn't hold and unfolded without much suspense.

Katherine Shaw over 5 years ago
I thought this was a decent American take on the classic Russian horror film, more direct

Jonathan Sundqvist over 6 years ago
It was a bit too creepy for me. But very well done.

Nicola Grosu over 3 years ago

Sven Delarivière over 4 years ago

Thin Mint over 5 years ago

R B over 5 years ago
Solaris is a 2002 science fiction film and psychological drama directed by Steven Soderbergh and starring George Clooney and Natascha McElhone. It is based on the science fiction novel by Polish writer Stanisław Lem, which also inspired Andrei Tarkovsky's critically acclaimed 1972 film of the same name and a 1968 Soviet TV film. Borrowing heavily from Tarkovsky's film, Soderbergh's version is a meditative psychodrama set almost entirely on a space station orbiting Solaris, adding flashbacks to the previous experiences of its main characters on Earth. Chris (Clooney) struggles with the questions of Solaris' motivation, his beliefs and memories, and reconciling what was lost with an opportunity for a second chance. Clinical psychologist Dr. Chris Kelvin (George Clooney) is approached by emissaries for DBA, a corporation operating a space station orbiting the planet Solaris, who relay a message sent from his scientist friend Dr. Gibarian (Ulrich Tukur). Gibarian requests Chris come to...
Read more on