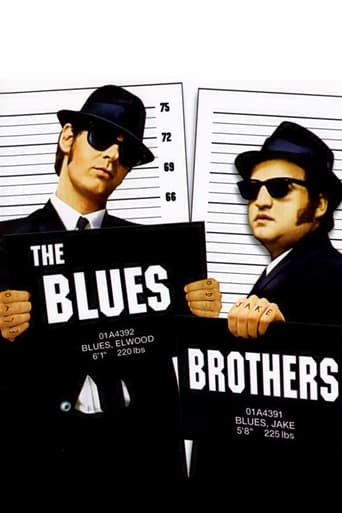 Johnny Nys over 4 years ago
So silly to watch now. If I didn't grew up with it, I wouldn't like it.

Jamel Booth over 5 years ago
I see the light! You will too when you watch this movie.

J.H. Howes over 6 years ago
Definitely in my top 5--I just hope it's in everyone else's

Fae almost 7 years ago
Great music, hilarious and goofy, and just plain fun. I loved it.

Mehul almost 7 years ago
Check out the musician's line-up for this one!

Chris Montague 7 years ago
A guilty pleasure. Surprisingly comical with music to excite

Derek Margaryan over 7 years ago
realy crazy movie, that was awesome to watch it...

Ferdinand Vogt almost 8 years ago
funny as hell
The Blues Brothers is a 1980 musical comedy film directed by John Landis and starring John Belushi and Dan Aykroyd as "Joliet" Jake and Elwood Blues, characters developed from a musical sketch on the NBC variety series Saturday Night Live. It features musical numbers by R&B; and soul singers James Brown, Cab Calloway, Aretha Franklin, Ray Charles, and John Lee Hooker. The film is set in and around Chicago, Illinois, and also features non-musical supporting performances by John Candy, Carrie Fisher, Charles Napier, and Henry Gibson. The story is a tale of redemption for paroled convict Jake (Belushi) and his brother Elwood (Aykroyd), who take on "a mission from God" to save from foreclosure the Catholic orphanage in which they grew up. To do so they must reunite their rhythm and blues band, The Blues Brothers, and organize a performance to earn $5,000 to pay the tax assessor. Along the way they are targeted by a destructive "mystery woman", Neo-Nazis, and a country and western band—all...
Read more on