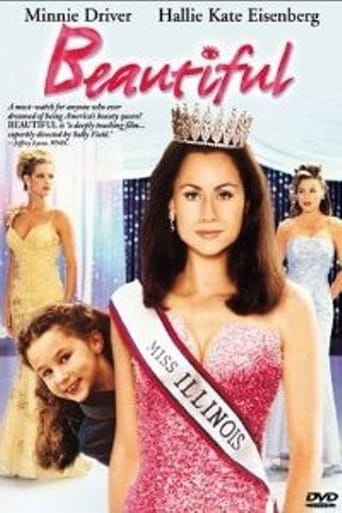 Lacey Shinn 5 years ago
Beautiful is a 2000 American film directed by Sally Field, starring Minnie Driver, Joey Lauren Adams, Hallie Kate Eisenberg, Kathleen Robertson, and Kathleen Turner. The plot is based around becoming Miss America and the sacrifices needed for this. Mona Hibbard (Driver) is a young woman from a troubled home who has one overarching goal: to become the winner of the Miss American Miss pageant. Unfortunately for Mona, women with children are not eligible for the crown, and she has a young daughter (Eisenberg), but her best friend Ruby Stilwell (Adams) selflessly agrees to raise Vanessa as her own daughter. As Mona gets closer to winning the title, she has to come to terms with her troubled past, her thoughtless present, the fact that Vanessa is starting to clue in to her true parentage, and an ambitious reporter (Leslie Stefanson) who is thrilled at the prospect of becoming a TV star by humiliating the despised Mona.
Read more on