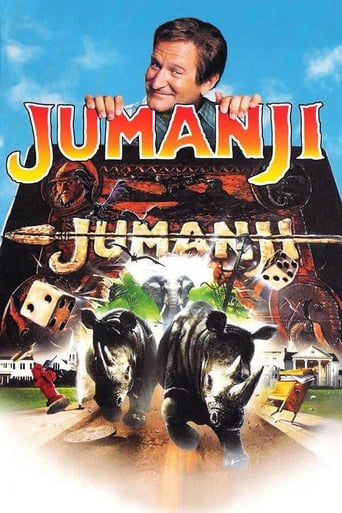 Sydney Stene over 2 years ago
This movie terrified me as a little kid, but watching it now was a blast and a half!

Amanda Mathews over 2 years ago
Adorable and entertaining. Definitely a classic

emilio murillo 4 years ago
Behind all the excitement and the fun, the relationship father-son is deeply rooted. Great

Brandon Keck over 4 years ago
Holds up better than expected. A genuinely exciting adventure.

Leif Jacobson over 4 years ago
I love this movie.

Justin L. Clemons almost 6 years ago
A board game brought to life. Adventures I wouldn't want to be a part of.

P4ssion4t3 over 6 years ago
childhood memories

Brighton Elizabeth Smith over 6 years ago
First movie to give me nightmares as a child.

Henke over 6 years ago
Great familymovie

Fae over 6 years ago
When I first watched this, I loved it but I wouldn't watch it now if I had a choice.

Ben Emmel almost 7 years ago
One of the favorite movies of my childhood. Robin Williams! Preteen Kirsten Dunst! Jungle!

Kealey Nutt 7 years ago
JUMANJI: Like an acid trip for children.

Margaret Swift 7 years ago
The drums used to give me nightmares. Still can't hear them without cringing.

Amber H 7 years ago
The beginning of this film is particularly odd ... something about a shoe factory?

belinda thomas over 7 years ago
never gets old.

Katherine Maradiaga over 7 years ago
Nice movie from my childhood. Watching it now tires me a bit, though.

Denise Fleming over 7 years ago
A childhood favorite. I will always be a little fond of Robin Williams.
Jumanji is a 1995 American fantasy-comedy film about a supernatural board game that makes wild animals and other jungle hazards materialize upon each player's move. It was directed by Joe Johnston and is based on Chris Van Allsburg's popular 1981 picture book of the same name. Industrial Light & Magic provided computer graphics and animatronics for the special effects. The film stars Robin Williams as Alan, a man who emerges from the game's unseen jungle world, along with Kirsten Dunst as a girl who plays the game with her brother, David Alan Grier as a hapless shoemaker-turned-police officer, Adam Hann-Byrd as Alan when he was a boy, Bonnie Hunt as the woman who played the game with Alan when they were children, and Jonathan Hyde in a dual role as both Alan's father and a hunter intent on killing Alan. The cast also features Bradley Pierce as the girl's brother and Bebe Neuwirth as her aunt. It was shot in Keene, New Hampshire, where the story is set, North Berwick, Maine (the...
Read more on