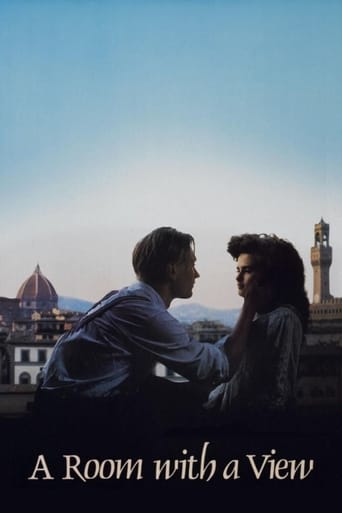 Robyn Hamilton almost 7 years ago
Helena Bonham Carter dithering about. Also Maggie Smith is almost kind of young for once!

Ashleigh Louise Klaassen over 1 year ago

Rolando Ruval over 1 year ago

Matteo Satta over 2 years ago

Philomene Tsamados over 4 years ago

Jillian Melchor over 5 years ago

Sven Delarivière over 5 years ago
A Room with a View is a 1985 British drama film directed by James Ivory and produced by Ismail Merchant. The film is a close adaptation of E. M. Forster's novel of the same name, and even uses his chapter titles to divide the film into sections. The film stars Helena Bonham Carter as a young woman in the restrictive Edwardian culture of turn-of-the century England and her love for a free-spirited young man. Maggie Smith, Denholm Elliott, Julian Sands, Simon Callow, Judi Dench, Daniel Day-Lewis, and Rupert Graves round out the principal cast. Elliott and Smith were nominated for Academy Award for Best Supporting Actor and Academy Award for Best Supporting Actress, but lost to Michael Caine and Dianne Wiest from Hannah and Her Sisters. Miss Lucy Honeychurch (Helena Bonham-Carter) from an English hamlet in Surrey is on holiday in Italy with her much older cousin and chaperone, Charlotte Bartlett (Maggie Smith). Charlotte is conventionally English, with an extremely restrictive...
Read more on