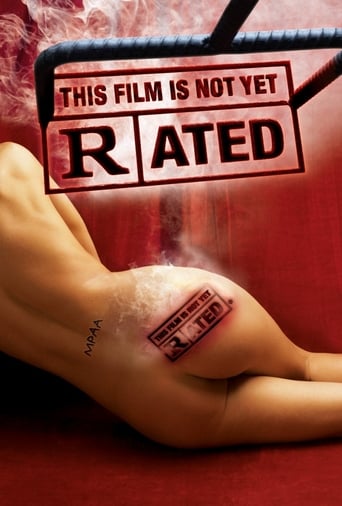 Noah Rymer over 4 years ago
Censorship is an important issue to me, so this Doc truly moved me

Leif Jacobson over 5 years ago
A biting and incisive, if biased, documentary. Particularly of interest to movie buffs.

Lizzie over 7 years ago
I will never think the same way about the MPAA rating system again.

Fernando Olivas almost 8 years ago
The fact that the MPAA rated this move was hilarious.

Dylan Clites 8 years ago
If you're a fan of movies, this doc will piss you off. A great behind the scenes look.

Jack Szumski 8 years ago
Shows a lot of scary and interesting things about the mpaa system.

Ahmed Mohamed over 1 year ago

Jonathan Care over 1 year ago

Joe Smith over 2 years ago

av to 3 years ago

Justin Oakland Buchanan over 3 years ago

shanika over 3 years ago

Adam Dobay over 3 years ago

B King K over 3 years ago
This Film is Not Yet Rated is a 2006 independent documentary film about the Motion Picture Association of America's rating system and its effect on American culture, directed by Kirby Dick and produced by Eddie Schmidt. It premiered at the 2006 Sundance Film Festival and was released limited on September 1, 2006. The Independent Film Channel, the film's producer, aired the film later that year. It was rated TV-MA in the United States. The MPAA gave the original cut of the film an NC-17 rating for "some graphic sexual content" – scenes that illustrated the content a film could include to garner an NC-17 rating. Kirby Dick appealed, and descriptions of the ratings deliberations and appeal were included in the documentary. The new version of the film is not rated. The film discusses disparities the filmmaker sees in ratings and feedback: between Hollywood and independent films, between homosexual and heterosexual sexual situations, between male and female sexual depictions, and between...
Read more on