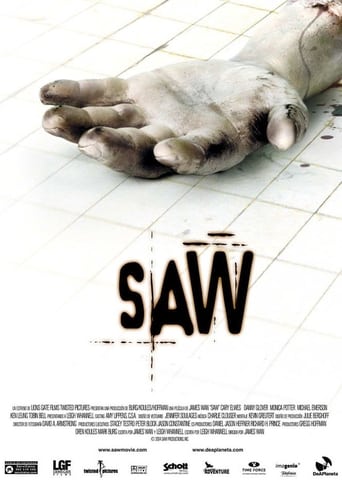 jojodoug over 2 years ago
Terrible script and horrific acting. Don't see this movie.

Tyler Goetz over 5 years ago
It's the best in the saw series. A great watch the first time around.

Gabriel Picolo over 7 years ago
The first SAW is genial and its plot twist still amuses me.

Shuichi Tanida 8 years ago
Nothing too special, it does have a fair amount of gore, but the plot twist is amazing.

Ian S over 2 years ago

Thibaut Morel over 3 years ago
"Saw " is a nine-and-a-half-minute Australian short subject horror film released in 2003. It was directed by James Wan and written by Leigh Whannell, who also starred in it. It was originally used to pitch their script for a full-length feature film Saw to various studios and actors. The full-length film was eventually made in 2004. The short film later became a scene in Saw, with Shawnee Smith as Amanda Young wearing the Reverse Bear Trap device instead of David. The original short can be viewed on the second disc of Saw: Uncut Edition. A young man, David (Whannell), is in an interrogation room talking to an unnamed, unsympathetic police officer (Paul Moder). David is in handcuffs, and he has blood on his face and shirt. He is smoking a cigarette. He tells the officer that after he finished his work as an orderly at the hospital, he was knocked unconscious and taken to a large room. Inside the room, David was strapped to a chair with a large, rusty metal device locked onto his head....
Read more on